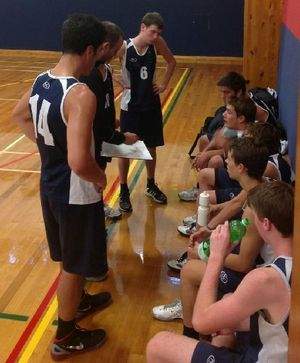 Athletics At the North Island track and Field Championships held in Masterton, seven athletes from Bethlehem College competed for the Waikato - Bay of Plenty Team. Our school members produced a great set of results.

Madison Rennie ran an outstanding race and came in 2nd in the Junior Girls 1500m and backed that up with a 6th place in the 800m.

Luke Hardy produced easily a personal best and came third in the Junior Boys Shot Put. Both Cameron Gerlach and James Harwood have had an amazing athletics season as they have discovered new talents and really worked hard at their respective disciplines.

They ended up in sixth place - Cameron in the 110m Senior Boys Hurdles and James in the Senior Boys High Jump.

Also sixth was Thomas Bernard in the Senior Long Jump. Matt Connolly has been achieving athletic success for several seasons and capped off another fine year with second in the Senior Boys 400m and was also part of the victorious Waikato-BoP 4 X 100m and 4 X 400m Senior Boys relays. He also qualified for the Senior Boys Triple Jump as did Madison McBride in the Intermediate Girls High Jump.

Golf Madison Gartner wrapped up her golf season by being part of the Tauranga Golf Club that won the Top of the Harbour junior golf interclub championships.

Playing two games over the first day, they won the first game against Aquinas 17-0, and lost the second game to Otumoetai College First XV. Eight minutes of the second game was played with 13 men, so once the team was back to full strength they looked solid with a lot of positives for a pre-season performance.

The tournament playoffs were held on Tuesday where we faced Otumoetai 2nd XV, beating them convincingly to place 3rd overall and claim the first piece of silverware for the winter sports cabinet.

Water PoloThe water polo team has had a very successful season, and are so far unbeaten in their competition. Their next game is at the BOP polytechnic pool against Hamilton Boys' High School B who are also unbeaten in pool play, followed by Rotorua Lakes High School. Finals day will be held next Thursday 18th April.

Football The First XI football boys are travelling to Western Heights High School this weekend in Rotorua to compete against schools from all over the central North Island. Good luck boys.

All winter sports teams are training hard, with our hockey, netball and football squads all being finalised through trial matches over the past few weeks. We still need coaches for netball and girls hockey - please contact the school if you can help.