The BOPSS Ultimate Frisbee tournament was held at Arataki Park in the Mount in very windy conditions. Eleven teams participated from 8 different schools. There were two senior pools and one junior pool.

In the senior pools both mixed and boys teams competed together. Katikati Boys won pool one and the spirited Whakatane High School boys team won pool two setting up boys final.
Katikati Boys prevailed in a good final that was played very competitively with good sportsmanship. Mount Mixed came a close second in pool one setting up a mixed final against Western Heights.

As Ultimate Frisbee is both a highly competitive and self-officiated game "spirit" is an important part of our sport. All teams demonstrated exemplary spirit with a combination of competitiveness, fun and a willingness to self referee while taking the time to listen and discuss calls. The Mount Mixed, Te Puke and Junior Whakatane Boys won the spirit awards for their pools. Notably Mount Mixed got a perfect score in all games as judged by their opposition which is fantastic to see.

Nineteen different players got votes for MVP reflecting the number of good players and athletes on the park. Three players got multiple votes and won MVP frisbee awards. 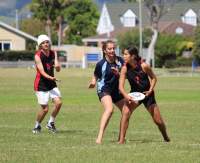