Young surfer ready to step up 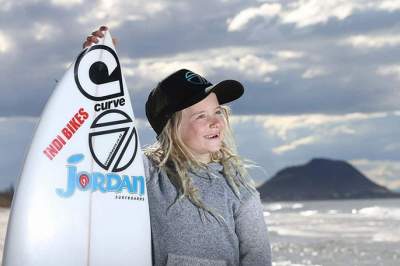 At just eight years of age, Mount Maunganui's Indica Knox Corcoran is shaping up to be one of the best surfers for his age in the world.

His Dad, Phil Cocoran says Indica, better known by his nickname Indi, is already looking at a busy year on the waves.

“First up is the national championships in Gisborne, he's entering the under 14's because that's the youngest division.

“Then there's the Bay Board riders competition, followed by the Billabong grand competition on Tay Street, which is run by Surfing New Zealand.

“At the beginning of February there's another grand competition Whangamata and then at the end of the month, there's a Billabong grand in Piha.

“On top of this we're also trying to get him back to the Hurley Surfing High Performance Centre in Australia.

“Then we're hoping to get him back to Bali to compete in age groups then back to a competition in Australia.

“If we get to go back to Australia and Bali it's going to be a full year for him competition wise.”

“He's still managing to keep up with schooling. His teachers have said because he has had a lot of time off, it has hindered him a little. But he's still doing well and isn't behind.

“For his birthday and Christmas we got him a new tablet so he does a lot of work while we are away and there is also a scholarship being offered by a company called Global Industries which we're looking into.

“We're trying to work out whether it's worth it for us to put in an application because it is for 10-14 year olds.

“The scholarship will go to 13 people in Australia and New Zealand with those people receiving two surfboards as well as $1000 to put towards helping their school.”

He says surfing started for Indi when he was only three years old.

“He's doing amazing, we went to Bali last year and a big goal was for him to start catching his own waves. Then he got tonsillitis while we were over there so that set us back a bit.

“Despite this he got fifth and third in the under ten age group, so he did well in that situation.”

One of his biggest achievements includes winning his age-division in Australia in 2016.

“This sent him up a division in 2017 and he needed to be able to catch his own waves to do well in that.

“He ended up missing out on making the final by 0.3 points and a lot of that was to do with the fact I was helping him in the water, whereas all the other kids were doing it themselves so he got points taken off him for that. If he was surfing by himself he would have won it.

“Now that we're back home and he's not sick anymore, he's started catching waves on his own.”

He says their main goal for 2018 is to help Indi to progress even more.

“We've heard it from so many people at competitions here and overseas, he would have to be the best in the world for his age, we just have to get to those competitions for him to prove it.

“Because he's in the under 14 age groups he's only ever progressed through one heat, but with the way he's doing, there's a chance he could make quarter-finals.

“Our goal now is for him to make a quarter-final out of any of those under 14 heats.

“We want him to progress so a big goal for us is getting him back to Australia to win the age division there.”

He says financial restraints are their biggest barrier to achieving these goals.

“We have one sponsor, Curves Surf and last year they helped get Indi to the HPC in Australia. They've said they like to do that again.

“Everyone else is also helping out by giving him boards and wet suits. It helps but it's not going to get him back to Bali.

“He doesn't even need to be in the water doing it himself, even him just sitting on the beach watching all helps him to learn and develop his own skills.”