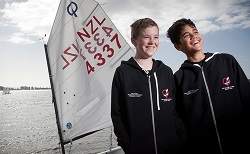 Lachlan Dillon, 12, and Joel Kennedy, 13, will represent New Zealand for the first time at the IODA Cinnamon Optimist Asian and Oceanian Championship that begins on Saturday in Sri Lanka.

The Tauranga Yacht and Power Boat Club (TYPBC) members are well aware that a 12-year-old Burling won the New Zealand Optimist Nationals (under-16) and also competed at the world championships the same year.

Lachlan, who attends Aquinas College, says it was great spending time with Burling over the summer.

"It is nice having someone like that around in the club. It is quite cool because you get to see what you need to do to get up to that level," Lachlan said.

"It is helpful seeing how he trains and figuring out what you need to learn by how he does it. If you do the same things you might just be as good as him." Joel agrees there is no better role model for all the young sailors at TYPBC to follow.