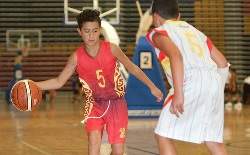 The best young basketball players from across the North Island have been throwing down their skills at the Mel Young Easter Basketball Classic in Rotorua.

The four-day tournament started on Friday and is so big this year it had to be held across two cities, Rotorua and Tauranga.

The under-11s and under-13s have been in action at the Energy Events Centre while the under-15, under-17 and under-19 teams have been playing at venues around Tauranga.

Finals day is being held today and a couple of Rotorua sides have progressed to their finals at the Energy Events Centre.

One of the Rotorua coaches, Wesley Hunia, said it was just good to give his players a run against top opposition from the different regions.

"We have had one win during the tournament which is better than no wins. But it's all good experience for the kids. It is about getting involved and having a go in the tournament."

Hunia's son, Ngakau Hunia, 11, played at point guard in the Rotorua under-13 boys' team and said he had been training hard in the lead-up to the tournament.

"My dad makes me and my brother run around the block for fitness," he said. "I also play league and rugby but my favourite sport is basketball."