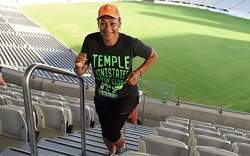 From ex-professionals to survivors who have used sport to overcome major illness, World Masters Games is the place for everyday heroes.

“When I was young, I lost both my parents to heart attacks. They were 48 and 50 years old. My siblings and I used to be sporty but became unhealthy later in life. That’s why, next year, I’ll be competing in the World Masters Games 2017, which is happening right here in New Zealand. It’s for people like me, and you, whether you’re a winner at sports or someone like me who wants to keep fit and have fun. My goal is to celebrate life through the World Masters Games and to inspire the next generation to stay active throughout their lives. I hope you’ll join me at the Games.” – Ema, from Auckland, New Zealand.

"I grew up in North Vancouver, initially in Deep Cove, surrounded by nature and steps from the salt chuck. We swam in the ocean from May to October but I wasn’t very good at it. As life unfolded, I ended up a single parent, raising a son who has autism. During those 20 years, I worked full-time while I earned my degree. Swimming was something I did for fitness, when time permitted. Three years ago, my son became quite independent and I started swimming with the Masters. I have met some amazing athletes and friends through Masters and I am inspired by their skill and determination. It must be contagious, because here I am registering for the 2017 World Masters Games."

"I'lI turn 50 in 2017. As a teenager I had the opportunity to turn professional in golf but chose not to as I didn't believe in myself. Now later in life I have been convinced that I have the talent to reach a scratch handicap. I have professional coaches and personal trainers around me who believe in me and my goal. And I am now on target to achieve my dream over the next few years. I want to use the Games as a milestone to prove to myself that goals can be achieved, and to prove to other women that it is never too late!"

CLICK HERE to read about more inspiring athletes and to learn more about the World Masters Games 2017.