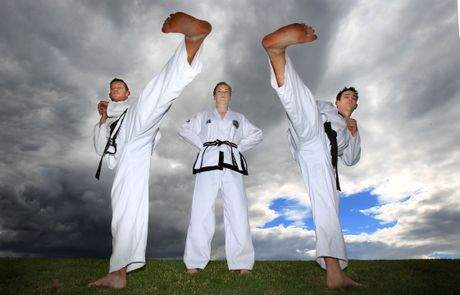 The Black family from Tauranga has made history by having three siblings named in the New Zealand taekwondo team to contest the 2013 World Championships in Spain in October.

This is the first time three members of the same family will compete side by side at a world tournament and is deserved recognition for such high performers in a sport that lacks publicity in New Zealand.

Ross, 22, is the oldest of the trio and has been to two world championships from his first aged 16. He became world champion at the 2009 event in Argentina in Team Specialty - one of the five taekwondo categories - before he stepped down from competition in 2011 and was assistant coach of the New Zealand team. But his competitive nature meant he decided to trial for Spain and he was delighted to be selected in the Senior Hyper Weight Sparring division. "This is the first time I have been selected in an individual spot and the first time I have made the team without another team member getting injured and me taking their place.

"So I got the spot fair and square this time and, if I do well, this will probably be my last one. There is so much time and effort involved so sometimes your career has to be put on hold for a couple of years just so you can train for the sport to be competitive."

Ross says the over 86-kilo division he is competing in is a real mix of power and speed. "Because it is such a heavy division you have to have the weight behind you so you don't get pushed around the ring, but still be able to have the speed and agility of a lighter, quicker person."

Shane, 20, will be competing at his fifth world championships since 2006 and he is regarded as one of New Zealand's highest achieving taekwondo athletes with 14 world championship medals including seven golds.

The newest member of the Black family to make the big time is 13-year-old Maddison, who has followed her brothers into the sport and Aquinas College.

She is the youngest member of the New Zealand team and is competing in under-60 kilo Light Heavy Sparring. "I have learned a lot from my brothers but the hardest thing is everyone expects me to be as good as them. This is my first worlds and I hope to go to many more."

Also in the New Zealand team to compete in Spain is 15-year-old Otumoetai College student Sean McDermott, who will also be attending his first world champs.