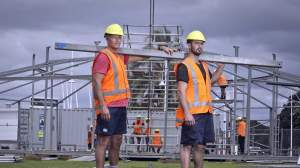 A group of youths who had been struggling to find and hold jobs were working hard at Tauranga waterfront - with help from a local initiative.

Ten men aged 18 to 24 were working on the Tauranga waterfront erecting the Carrus Crystal Palace stage as part of the upcoming Tauranga Arts Festival.

The men are part of the Sport Bay of Plenty youth engagement programme which helps young men and woman learn valuable skills to help them find a stable job.

This was the fifth year the youth engagement programme had run. It takes six weeks to complete.

This was the first time Sport Bay of Plenty had worked alongside the Ministry of Social Development to help youths who were receiving benefits.

According to Statistics NZ, the Bay of Plenty had an unemployment rate of 4.9 per cent.

The focus of lowering youth unemployment is tackled with lessons on CV writing, interview skills and work placements.

Youth team leader Paul Pou said the programme "was working" as they were seeing a 55 per cent positive outcome with youths who attend the programme.

"Positive outcomes could be future employment or returning to education as many of these kids realise they do need more qualifications to get the jobs they want."

Mr Pou said the main focus of the programme was to change the behaviour and attitudes of the youths by teaching the importance of a good work ethic, time management and self-awareness.

"Some had work opportunities before but had blown that so it's good to see their work ethic improving," he said.

In exchange for labour, six of the workers would put their earnings towards their upcoming youth leadership camp on Mayor Island.

Youth engagement participant Stacey Basham was feeling "motivated" as he worked on the construction site on Friday.

He was entered into the programme via Work and Income and said not only did it "lift his spirits" but he felt it was a good way to "get his foot in the door" with employment.

Mr Basham, who had previously done a number of different jobs including supermarket work, said he was keen to find full-time employment and the programme had allowed him to push himself.

"It's good to get out there with the rest of the boys and learn something new," he said.

The workers were on day one on the construction site and the stage was set to be complete in another two to three days.