Williamson Sportsman of the Year 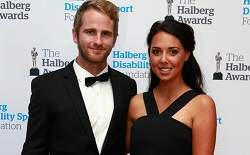 Tauranga's Kane Williamson has claimed the hotly-contested sportsman of the year prize after a stellar 2015 saw him rise to the top of the world.

The Black Cap excelled in all three formats, being ranked as the No 1 test batsman in the world late last year, and featured strongly as New Zealand made their first Cricket World Cup final.

Williamson saw off competition from Dan Carter, named World Rugby player of the year after the All Blacks defended the Web Ellis Cup, as well as Scot Dixon, who took his fourth IndyCar title, and golfer Danny Lee, who enjoyed his best year on the PGA Tour.