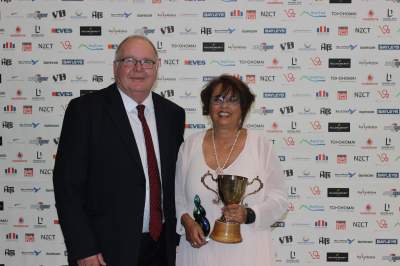 Thirty-six years of coaching, managing and mentoring young hockey players were celebrated at the 2017 Bay of Plenty Sports Awards.

"I was really blown away and overwhelmed, when there are so many deserving people out there who do so much," Sutton said.

She has been coaching and managing girls' hockey at the school, where she started as a teacher and has held several administrative roles, since 1980.

"When I came we basically had half a hockey team and the person in charge of hockey recognised me from when I played at school and asked if I'd be interested in co-coaching the first XI.

After 15 years, and with young children of her own, she was unable to keep up with the demands of coaching the first XI, but she was never far from a hockey turf as she coached social teams and the second XI.

In 2000 she took up the role of first XI manager, which she held until 2015. She has now stepped away from the game, in terms of holding an official role, but do not be surprised to see her cheering teams on.

"When I was younger I definitely preferred coaching, when I had that commitment and the time to give it, I really enjoyed the team performing in the way that I liked it and knowing my expectations."

The biggest highlight for Sutton has been seeing her passion for the sport replicated by the players she coached.

"The most amazing thing ever is that I look around Rotorua and elsewhere in New Zealand and overseas, but particularly in Rotorua, and the number of people there coaching that I coached. They're carrying it on and that's the best thing you could ever ask for, that the passion has carried on that far.

"Hockey is the school sport I'm most familiar with. I used to watch All Blacks train and think how can I change that to be suitable for hockey, there are always new ideas. Hockey is just a game I enjoy watching, I enjoy the skill level you can see develop.

"I just love seeing kids enjoy themselves. When you coach a sport at any level you develop a really good relationship with the students, they become extended members of your family in some ways."

Sutton said the best advice she could give an aspiring coach was to accept there were different levels of ability.

"As long as the people who are participating give it everything they've got, it doesn't matter what the result is. The point is they have committed to giving everything they've got. It's wonderful to aim high, and we did achieve really highly, but that's a bonus. If you've given it your best, nobody can ask for anything more," she said.

"Her contribution has been outstanding and so great for the school. The girls keep playing this game they love and she has inspired them all.

"She's very passionate and committed, but also very staunch, there's no mucking around, the girls know that. She's balanced the work load of full time teaching and taking on girls' hockey after hours - the cold nights at the turf and weekends.

"Her past students are always coming back to help, I think that says something about Patti," Davis-Kaye said.