Wayne Goldsmith: Being a good sport 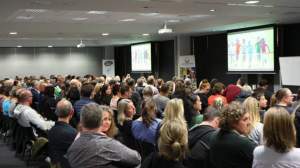 The internet is immolating itself with talk of who's a good sport and who's not - in America, it's the National Football League versus Donald Trump and his base; in New Zealand, it's winners and losers of the election and their acolytes.

Winston who? I care about politics. I vote. But I'll spare you further analysis of Saturday's election results for two reasons: Number 1: Other pundits have it covered. Number 2: Most of my attention is focused on shaping winners and losers of tomorrow - my kids.

I recently attended a talk hosted by Sport Bay of Plenty at ASB Arena called the Peak Performance Parenting clinic.

My guess is some of us are raising average athletes, while others have children on the path to national and international teams.

What might this coaching guru - someone who's clapped shoulders of Olympic medallists and All Blacks alike - tell us that will help us ensure our children get proper training and encouragement to become champions? What's the formula for podium-grade progeny? First, a story...

Goldsmith described the morning routine, when he tries to wake his four children at 5am, then 5.30, 6.00... By 7.29, they're due to leave for school in one minute and still searching for items, getting bags together and mucking around.

Sounds like our house. He asked those of us who'd packed our kids' lunches, washed sports clothes or packed a gym bag the past week to stand. Nearly all of us rose to our feet.

"That," he said, "Is the stand of parental shame. Stop doing things for them."

Step one to raising a champ - stop enabling laziness and disorganisation.

"The trick is not talent."
Why did I need someone to cross the Tasman to tell me what I already knew? You've heard the saying - "Hard work beats talent when talent doesn't work hard."

Yet Goldsmith laid out his case with dad-ness and humour, so I bought it and have been chewing on it since. I took notes so I could tell my family. And you.

A mum in Southland recently told him her 11-year-old daughter was such a talented netball player, she was considering moving the family to Auckland for better opportunities.

One defining quality of an athlete is commitment. "Anyone have bacon and eggs for breakfast?" Goldsmith says, setting up a joke. "The pig was committed. The chicken was just involved."

Someone committed to success will choose the hard way, not the easy way.

I think of my cherubs and wonder if we've gotten it half right.

There's nothing like expert advice to raise the threat level for parental neuroses to DEFCON 1.

Step two to raising a champ - realising children are either committed to their sport, or they're not. I can prod, but they'll choose their path.

Young athletes are a lot like writers - needy in the arenas of validation and affirmation.

Hearing, "You gave it all you had. That was great, and I'm proud of you," is like water seeping into dry earth - nourishing, re-invigorating.

Hearing, "What was that? What's wrong with you?" is deflating.

It is Coach Mum/Dad/Caregiver who matters most - we celebrate young winners and cradle them when they're disappointed or hurt.

Goldsmith instructs us to close our eyes. "Imagine your child 20 years from now. They're walking down the street towards you. What do you want for them? Do you imagine medals around their necks?"

I don't. I want my kids to grow into happy adults. To be confident and kind. To support themselves, buy their own food, do their own laundry and stay out of jail.

I picture them, ages 33 and 31, wearing my grandbabies in front packs. The rings I envision aren't Olympic - they're folds of fat encircling baby wrists.

It would be a podium finish and new beginning at once.

First, I must raise the rug rats during this brief flash in our family's sporting history.

The days are long, the years are short, and my children have many more lunches to pack.