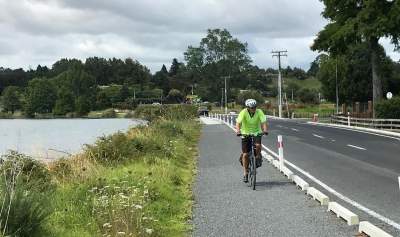 The area surrounding Tauranga’s Wairoa River is not only a picturesque space, it’s also thick with history.

From the nearby culturally significant Ongarahu Pā site to areas where Europeans settled and started families with local Māori, these are just a couple of the stories that will be acknowledged during Sport Bay of Plenty’s latest Historic Ride event - the Wairoa River Historic Ride.

Māori historian Reweti Te Mete will take the lead during the event, guiding riders from the meeting point at Wairoa River Bridge in an easy and enjoyable jaunt along the cycle trail toward Plummers Pt. Along the way, Reweti will highlight “key historical areas”.

Reweti said Ongarahu Pā, which sits within the Huharua Harbour Park at the end of Plummers Pt, was one of the many.

“It’s a site that is sacred to the people of Pirirakau and has an extensive history attached,” Reweti said.

“I’ll be acknowledging some of the hapū around the area,” Reweti said.

Reweti, who is from Ngāti Ranginui, which is the iwi whose tribal area includes the route of the Wairoa River Historic Ride, said he always enjoyed the opportunity to share local history to new audiences.

During Bike Month in February, historic rides were held in Ōtūmoetai and Pukehinahina (Gate Pā), led by Buddy and Reweti, who shared stories of historic significance to each area.

The events had proven to be popular and well-received, prompting more historic rides to be added, extending them into March.

Reweti said many attendees had made comments about never knowing the information they received during the rides despite living in the areas for many years. Others were new to the area and wanted to find out more, he said.

“It’s a way of seeing and visiting the area and the community they’ve moved into,” Reweti said.

“It’s doing some exercise at the same time,” Reweti said.

This weekend, Reweti and Buddy are heading to the Ōmokoroa to Tauranga Cycle Trail for the Wairoa River Historic Ride and were looking forward to a social ride on a new track.

“It’s a new ride and it’s part of the Ōmokoroa to Tauranga cycleway that’s proving to be really popular,” Buddy said.

“It’s an opportunity to get out and ride and meet people and also learn about the history along the river area,” he said.

Buddy encouraged everyone who enjoyed a leisurely bike ride and were keen to learn more about the area, to take part by registering for the event.

When: Saturday, March 28.
Time: 9am start.
Meeting Point: Wairoa River Bridge carpark on the Te Puna side.
To register: https://bit.ly/3qMeGmW

Tips to a Successful Grant Application