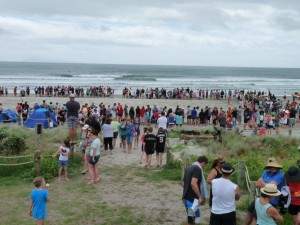 While it is stretching our imagination to claim Waihi Beach is part of the Western Bay of Plenty as we know it – the small beachside community is at the further reaches of the district council, which makes the following yarn nearly a local story.

On New Year’s Day, Waihi Beach celebrated the start of their second century of their iconic beach sports day.

In 1913, a group of Waihi gold miners started the first community day at Waihi Beach, before the local surf club picked up the reigns soon after formation in 1935, continuing the event to the present day.

In the early days of the 20th Century, Waihi, courtesy of gold mining, was the fastest growing town in the Auckland province with it being recorded in 1908 that Waihi was three times the size of Hamilton. Nearby Waihi Beach provided summer relief from the hard demands of recovering gold in the Waihi mines. So began, on the first day of 1913, the iconic sports day that has run without interruption for 101 years.