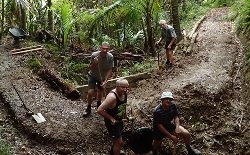 Mountain bikers and trampers muck in to revive part of a 130-year-old track that once linked Opotiki and Gisborne.

Deep in dense bush in the remote Eastern Bay of Plenty, a hardy bunch of mountain bikers and trampers are slowly bringing a 130-year-old trail back to life - by hand.

Whakaumu Track is the newest addition to the spectacular Motu Trails network, one of the 23 Great Rides on the New Zealand Cycle Trail and arguably New Zealand's most popular adventure mountain biking destinations.

Lying 18km east of Opotiki, the original track linking Opotiki with Gisborne was surveyed long before a formed road existed around the coast. It slipped from regular use in the early 1900s, remaining an Opotiki District Council paper road passing through the Department of Conservation's Waiaua Scenic Reserve. It remained largely forgotten until a decade ago. The first efforts to reopen the trail - named Whakaumu after a nearby peak - began in 2009, but it wasn't until 2015 that work began in earnest. For the past 14 months, up to a dozen people have traipsed into the bush each weekend to reclaim the trail with spades and pickaxes.

Opotiki local Jim Robinson is on the Motu Trails Charitable Trust and is helping lead the project.

"It's a stunning bush track. You're into mature coastal forest almost immediately, with the first [of several] waterfalls after just 200m," he says. "We're keeping to the exact line of the original track, but there are a lot of places the benching has slumped away or been buried. You can sometimes spend a day on a spade and only complete a few metres."