As the COVID-10 shutdowns swept across the country, the volunteers at Reporoa Squash Club knew they were fighting for more than a game.

“Every week our local farming community comes together at the club to play a few rounds of squash and catch-up,” explains club treasurer Treena Braithwaite.

But as the lights at the club were switched off, and the community began to retreat to their homes during lockdown, it wasn’t just the inability to play squash that hit the club hard – it was also the absence of social connections that were once so easy to find in the clubrooms.

“We’re a close knit rural community, and many of our members live on farms, so it was hard to suddenly lose the ability so easily catch-up and connect with each other via a few games of squash or at club events.” 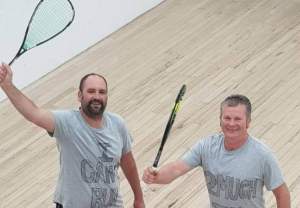 Weekly Zoom catch-ups between members helped, but in the background the club’s volunteer committee was facing mounting financial pressure to ensure the Reporoa Squash Club could turn the lights back on when social restrictions lifted.

“The shutdown came right on our change of season, and just when annual membership fees were due in April,” says Treena.

With the clubrooms closed, tournaments and social rounds cancelled and no membership fees coming in, the club began to lose thousands of dollars that typically went towards monthly operating costs.

“We still had a power and insurance bill to pay, our rates were due in May, and the seemingly little costs like fees for our Eftpos machine and security alarm kept coming in. On top of that we just didn’t know when we would be able to reopen.”

As the fixed costs and uncertainty mounted, Treena decided to apply for the Sport NZ Community Resilience Fund. The application was successful and Reporoa Squash Club received a $1000 grant from the fund within seven days.

“The money has helped us get through this lull and has eased the pressure of meeting some of our fixed costs.”

With restrictions lifted the club has now reopened and is welcoming previous members back with arms wide open. The dairy moving day earlier in the year has also brought some new sharemilkers to town who have decided to sign up as Reporoa Squash Club members.

“It’s great to be back at the club and to see people returning,” says Treena, “but it’s still a long road ahead as we adjust to this ‘new normal’.”

The Reporoa Squash Club is located Settlers Road in Reporoa. The club welcomes new members, casual players and beginners including those wanting to participate in its regular Business House tournament. Contact reporoasquash@gmail.com to find out more.

Phase 2 of the Community Resilience Fund , from July to September 2020, supported 104 community play, active recreation and sport organisations across the Bay of Plenty to a total of $743,791.

Sport Bay of Plenty Sport Manager Nick Chambers says the Community Resilience Fund has provided some much needed security for sport, recreation and play providers across the Bay of Plenty region.

“We’re proud to have partnered with Sport NZ to help organisations facing great hardship during Covid-19. The extra support has also ensured that our community’s activity levels and wellbeing needs are met throughout the alert level framework.”

The fund is part of the $265 million Sports Recovery Package announced at Budget 2020 and focused on providing short-term support to help play, active recreation and sport organisations get through the initial impact of Covid-19.

Read more about funding opportunities at Sport Bay of Plenty