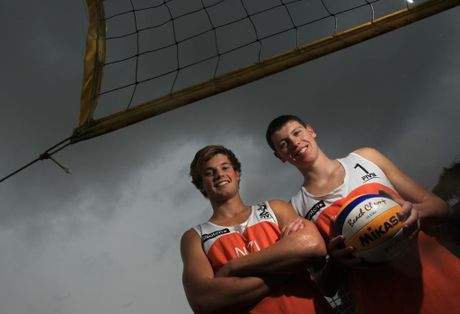 Two Tauranga teenagers have their sights set on global under-19 beach volleyball glory ahead of the age group world championships in Portugal next month.

Tauranga Boys' College Year 13 student Brad Fullerton and Otumoetai College old boy Liam Matheson are a big chance at the tournament after their top 20 finish as relative youngsters at the event last year.

The boys have high hopes as only about a quarter of the teams are returning from last year's tournament.

"We want to place in the top five, so quarter-finals or better," said Matheson.

"In placing 17th last year we got knocked out in the first round of elimination, but this year we want to aim for two rounds better than that, which could hopefully get us some funding from Sport New Zealand."

Matheson, who only started playing the sport in Year 10 as a way to spend more time with friends, has risen through the ranks to be one of the country's top young prospects.

After first making the Otumoetai College Senior A side in Year 12, he progressed quickly to make the North Island secondary school indoor team before travelling to Singapore with the New Zealand under-19 development team in 2011.

Fullerton has played for much longer, but only started taking the sport seriously once he was exposed to expert coaching at secondary school.

"It was going to be our 10th or Western Heights' 10th so it was amazing. I've never felt anything like it. It made everyone so proud."

In less than two years they have formed a formidable beach combination that impressed at the Swatch Youth World Championships in Cyprus and captured the under-19 title at the New Zealand championships.

Like many promising young players from across the region, they are looking further abroad in their development.

"I'm currently looking for a scholarship to America to continue my volleyball over there," said Matheson. "With the scholarships to America I'm looking to gain one for indoor because you don't really play beach at college over there. In the future, though, I'll probably concentrate on beach because I'm not exactly tall enough for indoor if you look at some of the guys on the world circuit."

The BayTrust scholarship recipient attributes his success to the tireless work of coaches from Otumoetai College and, more recently, Tauranga Boys' College.

"They've all done so much through the years. The work they put in with us boys is just ridiculous - training three times a week every morning before nationals."

At the end of the competition the pair will travel to Miami to meet up with the New Zealand under-19 indoor team to contest the US high performance championships.