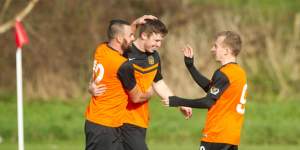 Ngongotaha FC rounded out their title winning WaiBOP Premiership with a 3-3 draw against Matamata Swifts on Saturday with the league's top scorer Mitch Miller scoring all three of his side's goals to pass 50 for the season.

It means the champions have gone through the season dropping just four points, the result of the draw against Matamata on Saturday and at Waikato Unicol earlier in the season.

The side finished the season conceding just 18 goals and scoring 105 - by far the best stats for any side in the league.