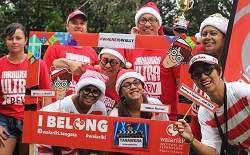 The Tarawera Ultramarathon is done and dusted for another year and those with a keen interest will have read and digested Swedish 100 kilometre World Champion Jonas Buud’s victory through the numerous live Twitter feeds, news articles, blogs and blow by blow race reports of the annual Paul Charteris inspired jaunt through the Rotorua Lakes and Tarawera Forest.

But elite racing aside the aspect of the event that struck me this year was the presence, attitude and community spirit of the volunteer army that helps overcome the logistical and geographical challenges involved in feeding, hydrating and caring for the 1300 athletes – not to mention keeping the spectators, crew and sensitive local environment safe.

It’s 7:30am on race day and although the leading runners are over an hour away the lakefront at Okataina is already a hive of activity.  A sea of volunteers from Waiariki Polytechnic  wearing Where’s Wally costumes seem oblivious to the rain; dancing to Poi E while simultaneously slicing up fruit, topping up bowls and platters with carbohydrate dense food and pouring drinks.  They’re eagerly assisted by a Hamilton Hawks runner who’s putting the finishing touches on a few honey sandwiches but won’t be staying long as she’s running a relay leg later.

Although the race started at 6:00am the volunteering began days and weeks before with teams clearing the track, stuffing race packs with programmes, brochures and other goodies and helping sign up and weigh runners at registration.

“Sport doesn’t just happen,” is an oft repeated slogan around the Sport Bay of Plenty offices and this is exemplified by the sight of Nick Adams who’s walking around in a wetsuit and is just one of the 300+ volunteers giving their time this year.  Nick is a rescue swimmer with the BayTrust Rescue Helicopter who is here for the second year manning the inflatable rescue boat (IRB) should the need to evacuate an injured runner arise.  Nick hopes his services aren’t required but is suited up and ready if they are and reckons he’ll at least go “For a good cruise in the IRB,” and despite his persistent offers I decide not to take him up on “A quick burn around the lake”.

As the fog slowly lifts over Lake Okataina the aid station volunteers spring into action topping up bottles and offering encouragement as the first runners arrive.  They’re followed soon by two muddied and soaking cycle patrol volunteers who helped guide the runners through the previous section of track.

Leaving the Rotorua Lakes and heading to Kawerau and back to the forest based aid stations the sheer number and variety of volunteers becomes apparent.  There’s the guys checking the forest permits, the traffic marshals, car park attendants and then there’s van driver Jaguar, who’s helping transport spectators from the carpark to the Tarawera Falls aid station.  Jaguar’s quick to tell me to “Spell his name like the car,” is from Kawerau and reckons he’s happy to help because “All his mates are, and they told me to”.

At the Tarawera Falls aid station the Where’s Wallys are replaced by Police Officers and at Tiktoki a distinctly Hawaiian theme emerges with volunteers wearing  hula skirts, floral shirts and Leis with an array of flowers, pool toys and tikis on display.  Runners’ numbers are constantly being yelled out and jotted down manually and in a joke no doubt repeated hundreds of times throughout the day a volunteer yells out, “Wanna get laid?”, popping her head through a floral frame with the message I GOT LEI’D AT TIKOKI at the bottom.

At Fisherman’s Bridge aid station Jimmy from Wellington Runners Meetup group (WORM) is fizzing despite only having a few hours’ sleep after driving through the night and arriving in Rotorua at 1:00am with four other volunteers.  Jimmy is pretty new to running, taking it up after moving from the UK two years ago but his enthusiasm for the sport is infectious as he describes his journey and progression in detail from a few jogs to a half marathon and today’s decision that once he’s completed a marathon then Tarawera will be firmly on the agenda.

At the finish line I manage to corner exceptionally busy event founder Paul Charteris for a quick word on the volunteers’ efforts for the day.  Paul is quick to mention “The importance cannot be overstated,” before continuing, “We’ve had five 100km runners finish so far and every one of them that’s come across that line have mentioned the volunteers, just how friendly they are, how much atmosphere there is at the aid stations and just how helpful everyone has been all day … we’re super proud of the people that are volunteering and their support of the runners has been incredible”.

Paul’s quote sums things up nicely really and on New Zealand’s national day where our nation’s differences and divisions are often highlighted up north in Waitangi - the virtues of community, giving, positivity, encouragement and support are overtly apparent on the back roads around the lakes and the forests of the Central Bay of Plenty in something that has become much more than just a running race.