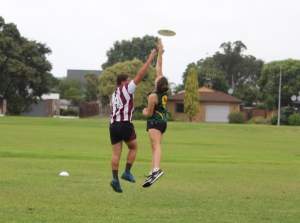 Ultimate frisbee is becoming more popular in the Bay of Plenty and local players are hoping the sport continues to grow through a Beach Ultimate League which kicked off this week.

Dayl Hoggard-Tataryn from the Mount Ultimate Frisbee sports club said the game had been played in the Bay for more than 10 years however it had started to gain a lot more interest in the past three years.

"We had about 15 core players who showed up once a week to play and now we have more than 50 members," he said.

For those who have never heard of the sport, ultimate frisbee is a non-contact, mixed-gender game where a frisbee disc is moved into the scoring area by being thrown to another player.

Hoggard-Tataryn said there were similarities between ultimate frisbee and a mix of other sports.

"Players must establish a pivot foot similar to basketball once catching the disc and are not allowed to run with the disc," he said.

Hoggard-Tataryn said there were no referees or officials at any levels of the sport, including during international competitions.

"The game is self-refereed with a strong emphasis on sportsmanship, fun and fair-mindedness, known as the spirit of the game," he said.

Players called their own fouls and then discussed the violation based on fair judgement, resetting gameplay if needed and continuing the game, Hoggard-Tataryn said.

New members were welcomed to join the Beach Ultimate League which started on January 17 and will run every Wednesday on Mount Main Beach until the end of March.

Hoggard-Tataryn said the sport was suitable for all levels of athleticism and all experience levels could get involved.

He said the basic rules of the game allowed for complete beginners to learn competent play within 30 minutes easily.

"I really enjoy the people that the sport attracts. It is all about good fun with like-minded people and enjoying a great workout."