Trip of a lifetime for BayTrust CoachForce officer

Football BayTrust CoachForce Officer Juan Propato recently took the trip of a lifetime when he attended the 2018 FIFA World Cup in Russia.

Juan, originally from Argentina, has been coaching football in the Bay of Plenty for five years.

“As a kid I was always playing football with my classmates,” Juan says.

“It reached a point where our teacher would take away the ball, but we always found a way to play, sometimes by making a ball out of tape.”

In 1986 Juan watched Argentina win the World Cup, and it was an experience that changed his life and further fueled his passion for the game. By the age of 16 he was a pro-club player. He later became a P.E. teacher before completing a masters in high perfomance sport and working for football clubs.

Eleven years ago, Juan moved to New Zealand and has coached football in Auckland, Wellington and Wairapa. Five years ago he moved to the Bay of Plenty and is now a BayTrust CoachForce Officer where he has developed his own coaching skills and helped coach players in to the 1st division. 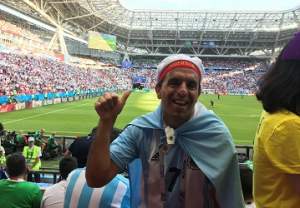 2018 was the first time Juan had managed to attend a World Cup, and he says the experience was unforgettable.

“It was a dream come true and absolutely awesome to be there with 45,000 other Argentinians.

“We won a game in St Petersburg and it was incredible to see everyone celebrating.”

One of the greatest experience for Juan, though, was seeing how the World Cup brought so many people from around the world together.

“Football is a great way of connecting and meeting people. As soon as you play football, you make friends everywhere.”