Hayden Wilde from Whakatane is a 2018 BayTrust Athlete Scholarship recipient. Peter Williams from the Bay of Plenty Times recently caught up with Wilde to discuss his first Olympic distance event of the year in Lausanne, Switzerland on Saturday 18 August.

After success over the sprint distance and in mixed relay (MR), Tauranga-based triathlete Hayden Wilde starts his first standard or Olympic distance event of the year in Lausanne, Switzerland this weekend.

Wilde, who turns 21 on September 1, was part of the New Zealand MR to place third in the Edmonton, Canada leg of the first ITU World Triathlon MR series just over two weeks ago.

"That was a really great result," he told the Bay of Plenty Times from his training base in Zurich.

"It was New Zealand's first podium finish since the Commonwealth Games and an absolute honour for me to do the anchor [final] leg." 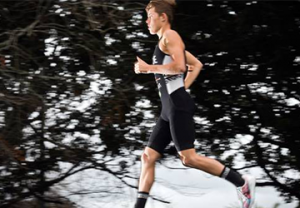 Wilde teamed up with Andrea Hewitt, Tayler Reid and Nicole Van Der Kaye as each team member completed a 300m swim, 6.6km on the bike and a 1.6km run.

Hewitt was 20 seconds down in eighth place after the first leg, but blistering performances from Reid and Van Der Kaay meant Wilde tagged out second, 30 seconds behind leaders Great Britain.

But the youngster held his nerve, Britain's inexperienced Chris Perham was consumed by the chasing pack early in the bike and Wilde, with a strong run, finished 10 seconds behind Australia's Jacob Birtwhistle and the USA's Matthew McElroy.

The result was dramatic improvement over New Zealand's 12th and 11th place finishes in the first two races of the ITU MR series in Nottingham and Hamburg. Wilde wasn't part of those teams having raced as an individual for most of the season.

The former Trident High School student has been a serious triathlete for only about 30 months. Naturally gifted with a huge aerobic capacity, Wilde was a double world champion at under-19 level in XTERRA – the off-road version of triathlon.

But knowing that XTERRA isn't an Olympic event saw him shift to Tauranga, start swimming with Liz van Welie, take on a part-time job with Landscape Developments and become a serious triathlete with the aim of reaching the 2020 Olympics.

He announced himself in on-road racing with an extraordinary third place in the Port of Tauranga Half in January 2017, sharing the podium with race legends Braden Currie and Cameron Brown.

All of which suggests he has great strength and endurance - but what about the speed required for MR or even standard distance racing?

"Training wise, I've had to change everything," he says.

"I had no raw speed so it's been a big challenge to develop that. It's a good thing having that endurance background. Now it's about getting faster."

He also considers himself fortunate with the XTERRA background and the way it's treated his legs.

"Because I've been road running only for the last two years, I haven't been injured. When you run off-road the surfaces are softer but you also strengthen your ankles."

But his biggest change has been getting serious about swimming.

"I only started proper swimming two years ago. Now it's 5km five or six times a week and Liz says she hasn't seen progression like this before.

But his result in the Hamburg leg of the ITU World Triathlon in mid July shows he still has a way to go.

Overall Wilde finished 22nd there out of 56 starters. His time of 54 minutes 18 seconds was only 54 seconds behind the winner Mario Mola of Spain.

But his swim leg, at 9 minutes 28 seconds, was a full 34 seconds slower than the fastest swimmer, and second place getter, Vincent Luis of France.

His race in Lausanne on Saturday, in the tier 2 ITU World Cup, is his last of his European campaign.

Wilde is back in Tauranga next week to prepare for the World Triathlon grand finals on the Gold Coast where he'll race the under-23 event on September 14.