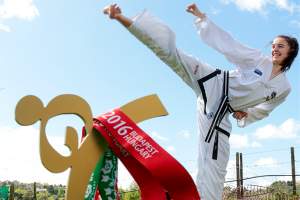 She's only 16, but Te Puna girl Frances Lloyd is already a world champion in Taekwondo.

The Tauranga Girls' College pupil recently travelled to Budapest, Hungary, for the 2016 ITK Taekwondo World Cup, where she was named best female junior competitor out of 1800 athletes from 56 nations.

Frances, a black belt who trains at the Silla TKD Club in Te Puna, says it's been a long journey getting to this point.

“I spent two to three years training for this particular competition,” says Frances, crediting her AMP Scholarship as an invaluable help in getting her to Hungary.

“Sparring involves touch contact with gear on. I was in the 65+ weight division, so I was versing massive girls who could have been 100kgs,” she says. “In my specialty I faced a range of opponents in size, but they were all between 14 and 18 years old.”

Winning a gold medal in her speciality, and a silver in sparring, meant Frances topped the female junior competitors.

“I'm proud, and also really grateful for the people who have supported me. I've been training with Paul Pou, my fitness instructor at Sport Bay of Plenty. I've also been training with the Rangitoa women's rugby team. They've kept me on track.”