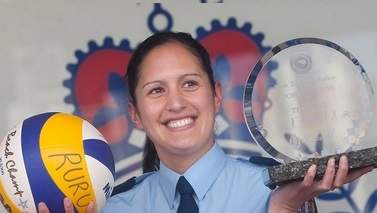 One of New Zealand's top beach volleyballers has won a prestigious police sports award, becoming the first from the Bay of Plenty to receive it.

Rotorua Constable Melissa-Mae Ruru was yesterday presented with the New Zealand Police Association Police Sportsperson of the Year award for 2012.

She said it had been hard work combining her sport with work, especially when she was working shifts, but she felt supported in her goal.

"It has been hard work but I'm now in the tactical crime unit and working day shifts so I can train around those hours," she said.

"In every section I have been with they have been so supportive of my sporting commitments - but I make them watch sometimes."

She said she was surprised when she read the letter informing her of the award but also nervous as she was about to sit her sergeant's exam.

"It was a day of mixed emotions," she said.

Last year her team was five places away from a spot in the 2012 Olympics.