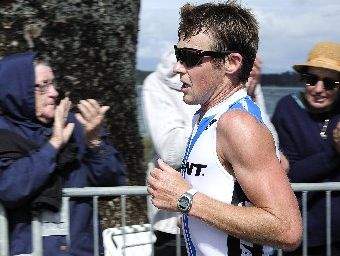 As far as straightforward triathlon victories go, Graham O'Grady's demolition of the strong field assembled for the Craigs Investment Partners Tinman Triathlon held at Pilot Bay yesterday was as clear cut as it gets.

The 30-year-old from Taupo showed the form that gained him the 2011 Port of Tauranga Half Ironman, with a consummate lead-from-the-front performance to win in a time of 1:55:29.

He attacked the tricky swim leg in choppy conditions off Pilot Bay to gain an early ascendancy and never let up his advantage over the bike leg and the final spectacular run around the Mount base track.

James Bowstead, who won the event in 2008 and missed last year's Tinman through injury, was comfortably home in second place, with Mark Bowstead next home in third place.

O'Grady says the race went perfectly to plan and his preparation for the Port Of Tauranga Half in five weeks is just as he would like.