Teen Boy a Hit in School Netball Side 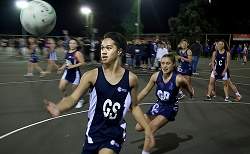 No sport is off limits for Creedance Kirikiri-Brown. He has excelled in a diverse range including touch, volleyball, sevens, First XV rugby, surf lifesaving and swimming.

But his love for netball sets him apart from his peers.

Creedance, 17, plays for a senior men's team and a mixed team in Rotorua and for Papamoa College in the secondary schools' competition held every Friday night at the Harbourside Netball Centre at Blake Park in Mount Maunganui.

He normally plays goal shoot or goal attack but is also a talented centre.

"I just was trying out new sports really. I like to give everything a go and my parents are people who like to play all-rounded sports, so I thought I would jump in and have a go at netball," Creedance said.

"It went far beyond what I thought it would."

Creedance admits playing in the girls' competition is a lot different than playing against men.

"It is also really different being on court and being the only guy. It is a good challenge though because girls really do step up their game in netball.