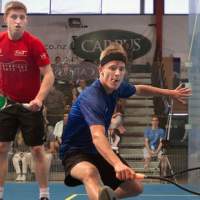 Entries from 28 countries have been confirmed for the 2017 WSF World Junior Squash Championships, to be held in Tauranga in July, making it one of the best represented sports events held in New Zealand outside the Commonwealth Games.

Defending champions Egypt are back, hoping to secure their sixth consecutive women's title. They are one of six countries to have a full squad of six men and six women alongside Australia, India, South Africa, USA and, of course, New Zealand.

Games will also be played at Mount Maunganui and Te Puke squash clubs.

An all glass court at the Queen Elizabeth Youth Centre (QEYC) will be the main show court with seating for 1000 spectators.

Tournament chairman Wayne Werder says the number of countries competing is extremely positive and great news for Tauranga and the wider Bay of Plenty region.

"It will be good for Tauranga economically and there will be great exposure for the region to markets around the world. We have all the major continents represented with teams from Canada and the United States, from South America, Africa, Asia and Europe."

Key players to compete in Tauranga include U19 world No 1 Mohammad Alsarraj from the Jordan Squash Federation.

At 18, Mohammad has proven himself in squash at the junior level and despite still qualifying for the age group competitions he has already announced himself on the senior stage with two victories at the tail end of 2016 on the Professional Squash Tour.

So can he win the title in New Zealand?

"I really believe I can win it before I fully move on to the seniors," he said.

Other players of note are Akanksha Salunkhe, the rising star of Indian squash and U19 junior women's national champion, and Alex Haydon from Adelaide, South Australia. At only 15 years of age, Alex already has amassed a number of national titles.

The last Australian female to win a Championship title at the world juniors was Rachael Grinham in 1993.

Games will be broadcast via the tournament's webpage here.