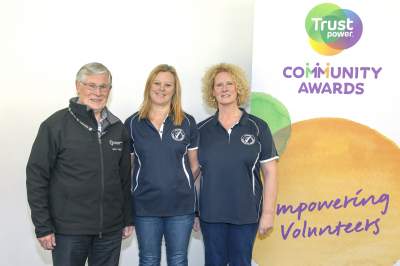 Te Puke Gymsport did Western Bay of Plenty proud at the Trustpower National Community Awards in the Queenstown Lakes District over the weekend, going head to head with the country’s best and brightest volunteer groups and projects on a national stage full of friendly competition.

Sarah Elliott and Jane McKay represented the group, with Mayor Garry Webber and wife Carole on hand to support the team over the weekend.

Trustpower Community and Communications Advisor Abbie Siely says although the group did not come away as award recipients, they showcased the club’s professionalism and longevity.

“Te Puke Gymsport has been changing lives through movement since 1954. Since then, the group has not only survived, but thrived. It’s an impressive achievement for any business, let alone a voluntary organisation. Sarah and Jane brought with them the passion, energy and determination that has made Te Puke Gymsport the success it is today.”

The national competition brought together 25 groups from across 27 regions – all of which were named Supreme Winners at their local Trustpower Community Awards.

Te Puke Gymsport was named Supreme Winner at the Trustpower Western Bay of Plenty Community Awards last year in recognition of its work to create a well-managed and innovative club, contributing positively to hundreds of lives.

In between a weekend of sight-seeing and networking, Sarah and Jane gave an eight-minute presentation explaining the work the club had put into upgrading its customer service experience and broadening its reach throughout the district. Participating groups were judged on their presentations, along with a 1,000 word summary of the organisation, by their peers and a panel of independent judges.

The winners were announced on Saturday evening (14 April) at the 2017 Trustpower National Community Awards Dinner, held at the Kawarau Bungy.

The National Supreme Award went to the Edgecumbe Volunteer Fire Brigade, representing Whakatane District, in recognition of their round-the-clock efforts during the evacuation and clean-up of Edgecumbe following last year’s flood event – putting the needs of their fellow townspeople first, even though their own homes lay damaged.