The city of Tauranga has won the bid to host the World Squash Federation Men’s World Squash Team Championship in 2021.

The WSF Men’s World Team Squash Championship is one of squash's most prestigious events and attracts the top male players from around the world to compete at the highest level. The event has not been hosted in New Zealand since 1983. 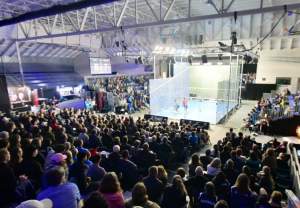 Current men’s New Zealand #1 and World #7, Paul Coll says “I am thrilled Tauranga has been chosen to host the 2021 Men’s World Teams Championships. It has been more than 30 years since this event has been hosted in New Zealand which means an entire generation of New Zealanders have not had the opportunity to view this level of squash. Tauranga is an amazing place and is one of the best coastal destinations in the world – I have no doubt the players will enjoy the opportunity to visit.”

Chair of the Organising Committee, Wayne Werder says of the event “I have fond memories of playing for NZ in this event and have always viewed it as an important part of the international squash calendar. It is great news that this event is back in New Zealand and for Tauranga to be named as the host of the 2021 World Championships. The World Junior Championships in 2017 were very well received and showed Tauranga’s ability to deliver world events – we look forward to delivering another world class event in 2021”

The principal venue for the event is the Devoy Squash & Fitness Centre which boasts six glass-backed courts and the Te Puke and Mt Maunganui Squash clubs will also be utilised. The impressive all-glass court will be the show piece for the event.

Tauranga Mayor, Greg Brownless says "we are delighted that Tauranga has been named host city for the 2021 Men's World Team Squash Championships. Following the successful delivery of the World Junior Squash Championships, the city is excited to welcome these impressive athletes and showcase our beautiful city to the world.”

Hosting an event of this calibre provides a strong opportunity to grow the profile of squash in New Zealand whilst showcasing New Zealand’s 5th largest and fastest growing city to the world.