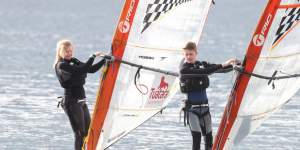 Tauranga teens Veerle ten Have and Max van der Zalm will take on the best young windsurfers in the world at the Techno 293 World Championships in Trentino, Italy next month.

The two Tauranga Yacht and Powerboat Club members were the reigning national under-17 champions and Kendall Cup holders, placing them at the top of New Zealand's youth talent pool.

Coached in Tauranga by Alex Hart, they competed in the under-17 division at last year's world championships also held in Italy.

They believed that experience would help them achieve higher placings next month.