Tauranga bridges open up options for cyclists and walkers 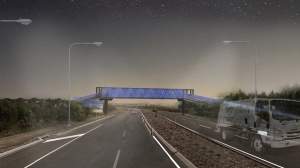 Two main roads in Tauranga will cease to be barriers to cyclists and walkers once overbridges costing $6.5 million are built.

One bridge would span the Pyes Pa bypass, linking The Lakes with Tauranga Crossing shopping centre at Tauriko.

Details of the projects were outlined to a Tauranga City Council transportation workshop and have been welcomed by cycling enthusiasts, including Chris Ingram of the Sulphur Point Recreational Cycle Group.

Mr Ingram said membership of the city's cycle groups was growing every week, mainly from retired people. The use of electric bikes was also increasing exponentially.

The rapid growth coincided with the council launching its Cycle Action Plan, a campaign involving cyclists and walkers to suggest and prioritise cycle routes. "It is a wonderful initiative."

He said the overbridges would also help the booming cycle tourism market, particularly once Tauranga linked into the national cycleways network via the Hauraki Rail Trail that ran through the Karangahake Gorge to Waihi.

Bunny Stunell, a rider leader with the group that met at Sulphur Point every Wednesday, said off-road connectivity was the main thing to encourage more people into cycling - particularly those who were not confident.

Sport Bay of Plenty's cycling co-ordinator Paul Roozendaal said everyone was saying that cycling in Tauranga was in a good place and getting better.

The Bay's sustainable business network manager Glen Crowther, of Bike Now, said the overbridges would make a more connected and safer network. ''We want to promote the key commuter routes.''

Council transport manager Martin Parkes told the workshop that the bridge spanning the bypass section of SH36 would be funded by development contributions, with ownership passing to the New Zealand Transport Agency.

He outlined how people walking from The Lakes would have a light-controlled crossing to the shopping centre by the BP service station on Taurikura Drive.

The bridge across Route K would be funded from the Government's Urban Cycle Fund. The plan also involved building a 20-metre bridge over the Kopurererua Stream below Wylie St.