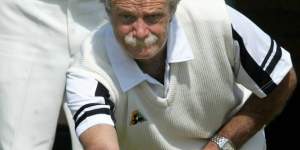 Congratulations to bowler Graham Skellern, who has set his sights on the Commonwealth Games after being selected in the New Zealand team for two international events on the Gold Coast.

Skellern, a Tauranga Club member and Bay of Plenty representative for 13 years, is part of a Para-sport triples along with Palmerston North's Mark Noble and Dunedin's Carolyn Crawford. They will contest the transtasman test series against Australia and soon after the Eight Nations event at Broadbeach.

The transtasman involves the Blackjacks Men's and Women's Open and Development sides as well as the Para-sport. Skellern, who has a total of 14 centre titles, competes against Australia (two sides), England, Wales, Scotland, Malaysia and Korea in the Eight Nations.

The events are being held as a build-up to the Commonwealth Games which will be staged on the Gold Coast in April next year. The Para-sport triples event is part of the Games.

National selector Sharon Sims says the Para-sport side has the chance to cement its selection.

"As the 2018 Games are in April we have already planned a second transtasman series for November. If all goes to plan we won't see many changes in the Para or Blackjacks teams."

Click here to read the full story from the Bay of Plenty Times.