The under-11 and under-13 boys’ and girls’ age group trials begin at 12pm with the players hoping to catch the attention of the Tauranga rep team selectors who will be picking eight teams or more depending on numbers.

“We try to cater for as many as we can at the younger age groups,” says Director of Development Rachel Gwerder.

“It is the bottom of our pyramid so obviously the more we can get involved the better because as you filter up you get less and less players as they become more and more elite.” 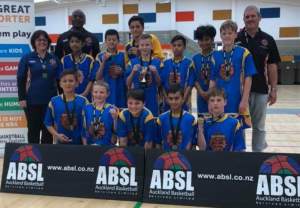 Rachel says it is hard to say how many will turn up on Sunday but with basketball booming in the Western Bay numbers are expected to be up on last year.

“We do have pre-registrations but many kids will just turn up on the day so we are not sure exactly how many will come. We do have the most pre-registered under-13 boys we have ever had.

“We normally average 150 but I would not be surprised if we get up to 250 in total this year.”

The trials are the first part of the rep season for what are crucial age groups in the sport.

“This is the starting point for basketball in this region. So we really are out there hunting for the next Briarley Rogers, the next Shalom Broughton, the next Maka Daysh, or for Rotorua the next Steven Adams,” says Rachel.

“It is the age group when we get them into the sport and get them into representative basketball. We know we can capture them at that age, sell the game to them, make them fall in love with the game and we know that they will stay in the game for the rest of their lives.

“It is also very important to have coaches come in at this age group as well and they work their way up. Hopefully they will stay involved in the game as well.”

The 2019 season is spilt into two for the age groups. The development stage begins now, leading towards the Mel Young Easter Classic which is followed by re-trials in May, with several tournaments to follow leading up to the BNZ regional tournaments at the end of the year.

Rachel says they trial again because schools are not up and running yet with basketball and the leagues have not started.
“We just want to make sure no child misses out because they are not in basketball mode now and are still playing summer sports.”

Final date to pre-register is Friday, February 15 at 5pm.