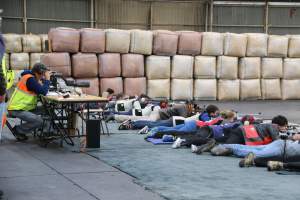 The Manawatu team, who have secured the trophy for the last five years, placed second in a keenly contested finish, but Bay of Plenty/Waikato managed to adapt to the challenging conditions and secure a win, scoring a total of 3891.173 (with Manawatu scoring 3885.168).

The competition, which has been running for 56 years, sees the top 10 ranked shooters from each of the 10 North Island Target Shooting Associations go head-to-head for the coveted Rees Scroll. The Bay of Plenty/Waikato team was made up of shooters from Tauranga, Te Puke, Rotorua, Putaruru, Cambridge and Hamilton.

The second teams, ranked 11th to 20th, compete for the Jim Hart Trophy with five Associations entering teams this year - the Bay of Plenty/Waikato second team placed fourth in their competition.

The 2018 event will be hosted by the Bay of Plenty/Waikato Association in Tauranga and will see some 200 shooters, managers and supporters in town for that weekend.