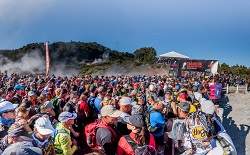 Entries for the one of New Zealand’s most scenic and culturally rich marathons, the Tarawera Trail Marathon and 50km, are about to open – but runners and walkers will need to get in quick because numbers will be limited to 1250.

The Tarawera Trail Marathon and 50km is only in its third year of operation but has already attracted significant national and international attention.

“This year we will definitely to sell out because of the friendly and supportive vibe, the beautiful scenery throughout the course – and based on the amazing feedback we received last year.

The Tarawera Trail Marathon is a point-to-point run that traces an important historical tourist route in New Zealand – the cultural journey of the local Tuhorangi people.

Mr Charteris says the cultural aspects of the event attract a wide range of runners and walkers.

“A number of highly ranked trail running athletes take part, but we also have mums, dads and others who haven’t ever completed an event like this before.

“Two runner even chose to propose to fiancées at the finish line last year, so we really see it all,” Mr Charteris says.

The marathon was named in The Guardian’s six best trail races in the world last year.

Mr Charteris says this year, getting in early is key.

“Interest in this event is skyrocketing. You won’t want to miss this one, I guarantee you won’t regret entering.”