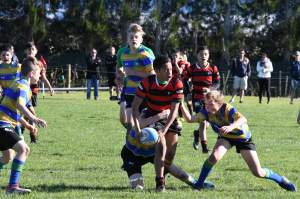 Thursday marked the start of this year's Tai Mitchell tournament, where teams go head to head to claim the Tai Mitchell Shield and Bill Murray Trophy.

This year two pre-season qualifying tournaments have been held splitting the 10 teams into two divisions one playing for the Tai Mitchell Shield and the other playing the Bill Murray Trophy.

The six teams that will compete for the Tai Mitchell Shield will be Te Puke, Tauranga West, Tauranga North, Tauranga East, Opotiki and Whakatane. The Billy Murray Trophy will be contested for by Galatea, Rangitaiki, Rotorua Maroon and Rotorua Gold.

While the tournament is all about the boys, this year’s tournament provides an excellent opportunity for young referees to also grow and develop. Ten referees from Waikato, Taranaki and Bay of Plenty will control the 25 games, under the direction of four experienced referee coaches.

The tournament doubles as a trial for the Bay of Plenty Roller Mills team, which will represent the province at the northern regional tournament against sides from Northland, Auckland, Thames Valley, King Country, Waikato, Taranaki and North Harbour.

The tournament will run from Thursday 6 July to Sunday 9 July.

Click here to view the Tai Mitchell draw and results.