Four young synchronised swimmers from Tauranga Synchro have showcased their talent on the world stage after competing in the Synchro America Open in Los Angeles in late June.

Eden Worsley, 16, Isobel Pettit, 18, Karlina Steiner, 14, and Eva Morris, 20, competed against top synchronised swimmers from around the world as part of the event on the FINA Artistic Swimming World Series 2018 calendar. 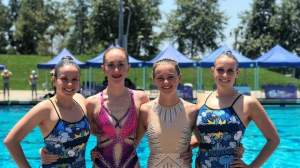 All four athletes achieved personal bests at the event, including Worsley and Pettit who scored a PB in the junior duet category, Morris who reached seventh overall and a PB in the solo category, and the youngest team mate, Steiner, who also achieved a PB in her solos.

The athletes are now training hard for the National Synchronised Swimming Championships in Auckland in October before they join the New Zealand team in Argentina and Brazil later in the year.