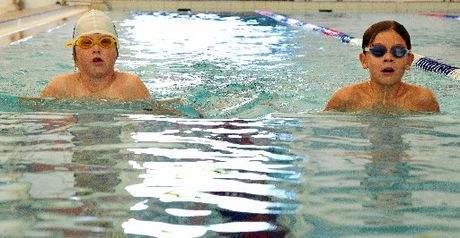 The two Otumoetai Swimming Club squad members have won the opportunity to be part of the first Jetstar Super Swim Squad Camp to be held at Auckland's Tepid Baths this weekend.

The camp will be hosted by double Olympic gold medallist Danyon Loader, New Zealand's current No1 ranked swimmer Lauren Boyle, and former swimming and triathlon champion Rick Wells, who will all run a series of training and motivational sessions for the 30 lucky athletes.

The two Tauranga boys qualified by winning their age group swims at the Sand to Surf Swim off the Mount Maunganui beach last month and are thrilled to be involved.

Nine-year-old Dominic, who attends St Mary's School, is in the Aquafit squad at the Otumoetai club and is looking forward to meeting both Loader and Boyle.

"Lauren went to the summer Olympics and she is our best swimmer," Dominic said.

"I have read about Danyon winning two gold medals so it will be great to meet them."

Dominic prefers swimming in the pool to ocean swimming and is also a promising water polo player.

But Liam loves swimming in the ocean and is into surf lifesaving as well as training at the Otumoetai pool in the regional squad.

The 8-year-old Bethlehem School pupil says he loves winning medals and ribbons and is also looking forward to staying up in Auckland and meeting the famous swimmers at the camp.

"It is exciting to be going there and meeting a famous swimmer like Danyon Loader. It will be fun."

The Jetstar Super Swim Squad was formed to support and celebrate New Zealand's next generation of swim stars and to support New Zealand families and encourage youngsters to have confidence in the water.