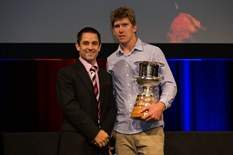 After a spectacular Olympic year in 2012, Peter has gone from strength to strength winning the World Sailing Championships, the European Championships as well as skippering the Red Bull Youth Americas Cup to first place.

Burling reflected that the Youth America's Cup and the 49er Worlds were his two big goals in what has been a busy year and that he was "stoked" to have prevailed in France, particularly in the lighter, less suitable winds.

Sport Bay of Plenty Sport Manager, Megan Cleverley commented “This was another challenging year of judging for the panel of judges. The most impressive aspect from this year’s finalists and winners is the wide range of sporting codes involved, as well as highlighting the many World Champions we have in the Bay of Plenty”.

The gala evening which combines both the secondary school sports awards, along with the open categories is a great celebration of the sporting prowess across all schools and codes.

Returning judge Craig Tiriana is once again thrilled to be a part of the judging team. “It’s such an intense process and I am reminded how fortunate we are to have so many great sportspeople in our region. Having been involved for several years now, I really enjoy seeing  those secondary school finalists and winners from previous years, coming through into the open categories. It’s a great opportunity for the younger generation to be inspired on the night as their sporting heroes take the stage”.

The six Secondary School categories provide inspiration to the up and coming athletes and teams and this year in particular it was noted how many different schools from around the region are represented in the finalist list. The Aurecon Student Contribution to Sport category highlights a student within the school system who has provided an outstanding service to sport in their school and community. This year’s winner from Reporoa College is Kale Grahame who volunteer coaches at the Reporoa swimming club as well as coaching Reporoa College Senior A girls basketball team.   He was also recently crowned the winner of the Overall Taupo District Youth Awards for outstanding all-rounder.

The Canon Service to Sport category acknowledged people who have been involved in their chosen sport for at least 10 years and have made a significant contribution at either regional or national level. The seven recipients came from a wide variety of sport, including bowls, rugby, surf lifesaving, hockey, and disability sport amongst others. The opportunity to recognise these stalwarts of the sporting sector is a highlight of the evening as they are unaware until the award is presented on the night.

“To see the contribution and achievement of those in the Bay of Plenty is truly inspirational. It is great to be able to celebrate these achievements and recognize the sporting talent that our region produces,” says Sport Bay of Plenty Chief Executive, Wayne Werder. “We are thankful to our family of sponsors who make these awards possible, and appreciate their continued support.”

Over 500 guests attended the awards last night, and joined in congratulating the finalists and winners in 2013. In what can only be described as an inspirational night recognising the Bay of Plenty best talent, congratulations must go to Peter Burling for his achievements and the strong list of award recipients.

The winners of the Bay of Plenty Polytechnic 2103 Bay of Plenty Sports Awards will join an illustrious group of past winners and become part of the Bay’s sporting history.

The Bay of Plenty Sports Awards encompasses a twelve-month period from the 1st October to the 30th September of each year and has been an annual event since 1969.

AquaPlus Club of the Year

Bay SportsMed Team of the Year

MoreFM Official of the Year

BayTrust Coach of the Year

Vodafone Junior Sportsman of the Year

ASB Sportswoman of the Year

Waiariki Institute of Secondary School Sportsman of the Year