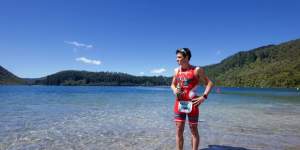 Triathlon superstar Javier Gomez has won his first Rotorua Half Ironman title - in his debut appearance as he returns from the injury that kept him out of the 2016 Rio Olympic Games.

The five-time world champion came from behind in the swim to win the overall race yesterday in a time of 4h 09m 59s.

Gomez, the 2012 Olympic silver medallist, said it was the hardest Ironman course he had competed in.

"It's probably the toughest half distance I've ever done. Obviously it depends how fast you go but the course itself is really hard," Gomez said.

Gomez was in second place after the 2km swim with a time of 23m 50s and then clocked split times of 2h 24m on the bike over 90km and powered through the 21km run in 1h 22m 08s, which included running the first 5km in just 17mins.

"It was only towards the end of the swim that I found my full rhythm. The bike then was very hilly and the run at the end was brutal," Gomez said. "I had no idea that it would be that hard. It was all off road and I took it easy in the end because I was suffering.

"It was a very honest course. I was trying to pace myself as best as I could because I was out in front.

"Hopefully I would do this again. I really loved it and I hope to be back here next year."

In second place in the men's field was Whakatane's Sam Clark finishing in a time of 4h 14m 25s with Bobby Dean from Te Puke in third completing the course in 4h 22m 29s.

"It is certainly the highlight of my career," he said. "To have such an incredible superstar at this event was almost beyond belief. For him he used the course as a training session for himself and there were parts of it he really smashed.

"The course record didn't matter to him, it was more about getting the best out of it for himself. To see him do what he did in the first part of the run was impressive - we've never seen anything like that at this event."

In the women's competition Auckland's Teresa Adam finished first in a time of 4h 37m 07s in her debut Half Ironman event, with fellow Kiwis Katherine Reardon in second after completing the course in 4h 56m 43s and Anna Lorimer in third in 05h 09m 29s.

The top female triathlete said she was pleased with her split times of 25m 13s in the swim, 02h 38m 04s on the bike and 01h 33m 49s running. She added that near perfect conditions aided on the day.

"It was awesome and I really enjoyed the day as a whole," she said. "It was a hard event but I didn't suffer as much as the race organisers promised. Maybe that's a good thing. I was really happy because the weather was gorgeous the whole time.

"There was a lot of support while I was running. It feels really good to take it home considering it's my first attempt at something like this."

In total close to 800 participants competed over the full, quarter and team events with 50 locals involved.

Vance Wilson was the top Rotorua finisher in the Half Ironman finishing in 5h 26m 22s (58th place overall) while Matt Parsonage was the first local home in the quarter distance finishing fourth in a time of 2h 16m 44s.