Success for Parafed BOP's inaugural Have a Go day 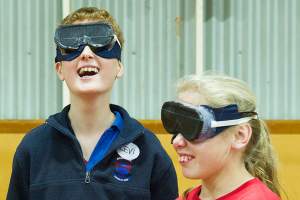 It was a bunch of kids; 13 special children from eight local schools including Rotorua, having a big sports meet – all adaptive indoor games and events designed for them and played by them at Parafed Bay of Plenty's first local ‘Have a Go Day.'

It was meant to be more about participating than competing – and offered kids with physical or visual impairment a chance to ‘have a go' in a safe, supportive and encouraging environment. But the competitiveness crept in.

Eight-year-old Ellie Jones of Te Puna was there.

“She tried everything, like all the children,” says mum Alexia Skipper-Jones. Badminton, boccia which is a cross between petanque and indoor bowls, goal ball and athletics.

“Ellie mostly enjoyed running because she is good at it, and boccia because she succeeds there too.” She also adores Stacey Roche, the 2000 Paralympic boccia captain who supervised the boccia at the ‘Have a Go Day.' Ellie also has a soft spot for Monique Eades who oversaw track athletics.

Badminton is played with hand and balloon. “Kids love balloons,” says Parafed's Leanne Flanders. “They are wonderful for their skill development and give the kids a starting point.”

Then, depending on ability, they can advance to racket and balloon and perhaps the shuttlecock itself. And there was goalball – for the visually impaired. Everyone is blindfolded so no one is advantaged or disadvantaged. There is a ball with bells and players use their bodies to block the ball from getting in the goal.

And there was a demonstration game of wheelchair rugby to show the kids sports that are available to them down the track.

The day was run in conjunction with Bay of Plenty sport professionals who supervised the various codes. It was about exposing kids to new sports and experiences. But it was also about recruiting kids for Parafed's planned youth development programme.

“It was cool to see, a really great time,” says Leanne. “And when we got boccia, you see the competitive streaks coming out.” Organisers thought the kids would tire. “But they were ready for anything,” says Leanne.

Some of the kids are Aucklandbound for the Junior Disability Games next month. Parafed says it's grateful for the help of the schools involved, supporters and volunteers from the Sport Bay of Plenty youth programme.

Parents who would like their children to be involved in the ongoing activities should call Leanne on 027 727 2333 or email leanne@parafedbop.co.nz