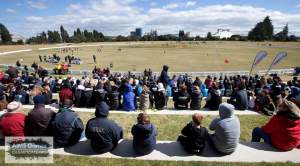 ‘Delighted', ‘marvellous', ‘remarkable' – these are a handful of words tournament chairperson Brian Driver uses to describe the 2016 AIMS Games which concluded on Friday.

The 13th edition of the annual tournament saw 9300 Year 7 and 8 athletes from 275 New Zealand and Pacific Island intermediate schools competing in 21 sports over six enthralling days of competition.

“We're absolutely delighted with the success of this year's games, they've created a tremendous hype right across Tauranga and have given kids an amazing opportunity to compete in competitive sport,” says Brian.

“From the schools taking part, to the volunteers and helpers, as well as the Tauranga community at large, absolutely everyone has been extremely positive with their feedback on this year's games.

“My favourite aspect of the tournament is the fact we see kids from a variety of schools from all over the country coming together and learning to not only compete, but to compete with dignity, to win and lose with dignity, that's a big feature for me.”

This year Tauranga Intermediate, which Brian is principal of, topped the medal table with 37 medals in total (16 Gold, 14 Silver, seven Bronze).

As you can imagine, Brian's pretty chuffed with his school's medal topping performance this year.

“The result is a reflection of our hard working staff, teachers and parents who are absolutely committed to coaching our teams and their commitment to our school.”

This year's tournament saw competitor numbers explode by 1300 on last year, a factoid Brian describes as “a simply remarkable feat”.

He also praises the 16 sporting venues in and around Tauranga involved in the tournament, saying they all “coped admirably” with the boost in numbers.

This year's also saw the inclusion of schools from Tonga and the Cook Island which Brian says was an absolutely marvellous experience for both the three schools as well as the tournament organisers.

“Following this year's games we can actually see the potential growth and having more schools from the across the Pacific Islands taking part in future tournaments.”