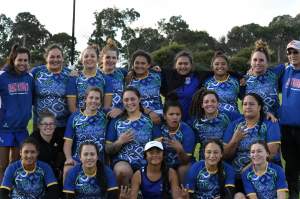 At the Bay of Plenty Rugby Union, we are passionate about providing exciting opportunities for our female rugby players to participate in.

With the various competitions and opportunities available this year, it’s evident to see we will continue to aid the development of pathways for those wanting to further their rugby careers in order to achieve representative level.

The women’s season kicks off with the Women’s Pre-Season Club Tournament happening on May 6 at the Whakarewarewa Rugby Club in Rotorua. The pre-season tournament will celebrate Women in Sport, and will be a fun and whanau-orientated warm-up for our Premier Women’s Club Rugby teams to compete in.

The interactive tournament will allow for whakawhanaungatanga among the clubs, alongside providing activities for everyone to enjoy. All players and supporters are encouraged to wear something purple in order to celebrate women in sport – whether its socks, headbands or even crazy wigs!

Next up is the Junior Girls 10s, a six-week module starting on May 7 until June 18. This programme provides an opportunity for Junior Girls aged 7-13 years to engage in tackle rugby with other girls, while also growing and developing new female coaches and coaches of female rugby players. Each week sees a different dress-up theme, so the girls are bound to have a fun-filled and energetic time.

Secondary School Girls Development Rugby commences May 14. The games will be played every Monday night for nine weeks, with two weeks of sub-union local games and every third week in Paengaroa. The competition will be 10-aside with the following schools participating: Tauranga Girls College, Mount College, Otumoetai College, Rotorua Girls High, Rotorua Lakes, Western Heights, Whakatane and Tarawera/Edgecumbe combined.

It’s going to be entertaining to see the Women’s Club Rugby beginning May 13. This competition features clubs from all three sub-unions competing, including the Tauranga, Rotorua and the Whakatane area.

Spring Sevens will take place July 30 for girls aged 7-13 years. This is a four to five week module for primary and intermediate girls to enter as an opportunity to further their rugby skills. Our intermediate girls’ teams use this as a lead into the AIMS Games tournament, while our primary girls’ teams use this leading into the Spring Sevens tournament held on August 31.

The Bay of Plenty Women’s Academy is now into their fourth month. The academy includes 12 females from across the Black Ferns, Black Ferns Sevens Development team, New Zealand U18 Sevens team and our Bay of Plenty Vocanix and Women’s Sevens.