SportsTalk: Women's rugby a force to be reckoned with 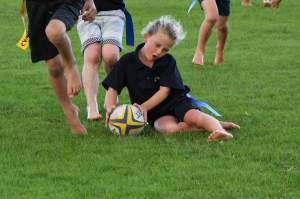 From Rippa Rugby to women’s representative, and everything in between, there has been huge growth in the sport as it becomes a code of choice for girls and women alike.

The numbers of participants at both club and school level continue to grow rapidly. Now with the inclusion of not just Rippa Rugby, but also Quick Rip in both secondary and intermediate schools, it gives girls and young women the opportunity to participate in a fun and interactive sport.

Just this week we’ve held our Bay of Plenty Rugby Union Holiday Programme featuring a girls’ only day. This initiative is about growing the game and allowing girls the opportunity to develop their skills, as well as have fun in an all-girls environment.

Following the programme’s establishment last year, we have more than doubled the number of girls participating. We hope it will inspire them to take up the sport long-term and aspire to be Bay of Plenty Volcanix or Black Ferns players.

From junior to secondary schools rugby, the pathway continues to provide opportunities for girls’ to be involved and grow their rugby knowledge. At the recent North Island Secondary School Sevens Tournament in Rotorua, the Rotorua Girls High School Under 15 side took out the U15 Girls Open section. These teams now transition to 15 aside rugby.

The Bay of Plenty Secondary School Girls’ 15 aside Competition provides the opportunity for novices of the sport to continue to develop in a separate development grade, but gives the more experienced and skilled players the chance to prosper in the premier competition. We are excited to see the competition grow with a record number of 15 teams confirmed to kick-off the season on May 10.

With an increase in participation with our Women’s Club Rugby over the Sevens season, it is pleasing to see this flow into our club rugby season where we will see new teams Rangataua and Whakarewarewa join the Baywide 15 aside competition alongside Te Whanau Apanui, Waimana, Rangiuru, Rotoiti and Waikite.

The upcoming Baywide Club Rugby Women’s pre-season tournament, to be held on Sunday, April 30 at Whakarewarewa Rugby Club, will provide teams with a competitive hit out and spectators will be treated to an abundance of rugby action ahead of the start of the competition on Sunday, May 7.

Following our local competitions, we will have our Volcanix Women’s team and Bay of Plenty Secondary School Girls team proudly representing the region as they take on the best in the country.

I encourage you to go along and see first-hand these amazing female athletes as they represent their school, club or region. You won’t be disappointed!