There's no real downtime in football anymore. Even though the winter season is nearing its conclusion, the WaiBOP Football team is already well down the track with our organisation for running three national league sides this summer.

In fact, the National Women's League gets underway before all our winter leagues will have wrapped up.

I’m delighted to say that the 2018 McDonald's Junior Football Coach of the Year comes from the Bay of Plenty. WaiBOP's regional winner, Sue Tilby from Papamoa FC, has just been announced as the winner of this nationwide competition, which includes an all-expenses paid trip to the 2018 FIFA Club World Cup. 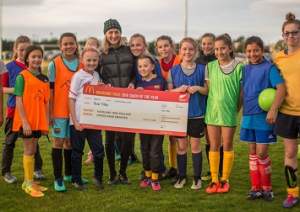 Sue won this award for her work with the Ospreys U-12 girls team and for her ongoing commitment to female football at Papamoa FC. As one of her nominators put it, Sue has: "Amazing planning and communication with the kids and parents, along with dedication to girls soccer. She runs the team and the Skills Centre for Papamoa. Sue is constantly wanting the best for girls soccer and is well respected by her team."

Congratulations also to Ben McFarlane (Otonga in Rotorua) and Art Brown (Glenview in Hamilton) who were WaiBOP's other two regional finalists. This is the second time in three years that a volunteer coach from the Bay of Plenty has won this competition, after Nic Millichip’s win in 2016. Thank to everyone who nominated their junior coach this year.

Along with a team in the 2018 National Women’s League, WaiBOP will be running two sides in the men’s National Futsal League. This includes a team representing the Bay of Plenty. Tauranga-based Joe Dixon, WaiBOP Football's Futsal Development Officer, will head the coaching staff of the Bay of Plenty team. Dixon and his coaching team are already holding trials for players looking to represent the Bay this summer at the elite level of one of New Zealand’s fastest growing sports.

We will also have our term 4 futsal league schedule available on the website within the next couple of weeks. We’re running leagues and tournament for players of all ages, so keep an eye on the website for more: www.waibopfootball.co.nz/FUTSAL/Futsal-1

In the short-term, we look forward our local senior leagues wrapping up and cup finals being played, along with the various junior cup finals and tournaments that take place during September. The Waikato Bay of Plenty wide senior men’s Loaded WaiBOP Premiership looks like going down to the wire, with Bay teams Papamoa FC and Tauranga Boys’ College still in the mix for the title. Congratulations also to Tauranga City Bay SportsMed for defending their WaiBOP Women’s Premier League crown.