SportsTalk! The Countdown to Worlds Begins 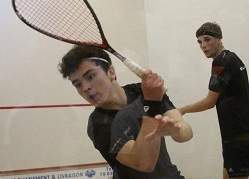 One year to go. The biggest squash tournament to grace the region in many years is coming to the Bay and organisers are in full swing with 12 months to go.

In July next year we are hosting the World Junior Championships in Tauranga. Host clubs Devoy Squash & Fitness, Mount Maunganui and Te Puke are gearing up for this high profile event which will put the squash worlds focus on our wee corner for ten days.

All of the world’s top juniors will descend on Tauranga, firstly contesting the individual competition, then the girl’s teams event that follows.

Many of the world’s best players have come through this event in recent years, so it is a fantastic opportunity to see the next crop of professionals on our doorstep.

The all-glass court is a spectacular showpiece for the sport, and will be erected to showcase the talent on offer. The final venue for the court is yet to be finalised, but it will certainly provide an amazing scene for squash and hopefully provide the sport with some much-needed media coverage.

This year’s World Juniors is about to kick off in Bielsko-Biala in Poland. New Zealand has sent a talented group of young players to fly the flag for us.

The boy’s teams event features an exciting New Zealand team, which includes Tauranga’s own Jamie Oakley. Jamie is currently the top junior boy in New Zealand and has been training for over a year for this event.

“The Worlds has been a focus for me for a long time. It’s a real privilege to represent the country on the world stage and I have been training hard and hope to do well,” Oakley said.

Jamie last year burst on to the international junior scene by making the final of the Canadian Junior Open, then backing it up with a solid performance in the US Open a week later. Those two results probably played a big part in securing his university scholarship which awaits Jamie at the conclusion of the World Champs.

“I am nervous and excited about heading to George Washington University. It’s an amazing opportunity and I plan to make the most of it.”

Brothers Josh and Julian have already made successful transitions into the US alumni through sporting scholarships, and Jamie takes tremendous inspiration from them.

“Yeah, it’s pretty cool knowing they are over there to support me. It will be tough to leave my family and friends, but having my brothers nearby will make it a bit easier.”

You can follow Jamie and the New Zealand team in Poland from 6 August on the Squash NZ website www.squashnz.co.nz