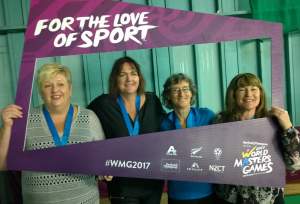 Nearly 20 badminton representatives from the Bay of Plenty region competed in the recent World Masters Games in Auckland and brought home an impressive haul of medals.

Badminton was played over 10 days at two venues: Auckland Badminton Hall in Newmarket, and at North Harbour Badminton Stadium on the North Shore.

There were more than 1200 badminton players from 100 countries, of which a number of representatives were from the Bay of Plenty: Tauranga, Te Puke and Rotorua. These players were participating in three categories – Open, Competitive and Social – across age groups starting at 35-plus to 75-plus.

The tournament began with team events for the first four days, followed by the individual competition. The whole 10 days were managed very effectively and efficiently, and we saw some great results from the local players – including myself, who won two gold medals in Teams - 45+ Open Grade and Women’s Singles - 45+ Open Grade.

Other notable successes were:

A huge congratulations to the winners and all participants, as well as to our BOPBA President Yve Rogers, who volunteered for the whole event and gave an amazing effort to recording results and scheduling events.

With regards to local badminton, the 2017 season is well underway with all clubs around the region open and ready to go. Badminton is great sport to get involved with, perfect for building up you fitness levels, while also having lots of fun – it’s very sociable. All clubs cater for casual players and have racquets that you can use if you don’t have your own.

For more details about the clubs available in your area, please visit our website here.

If you are interested in anything else badminton-related in the region, please contact me on badminton@sportbop.co.nz or phone 027 212 4720.