Table Tennis is now into tournament season, with regular event opportunities for local players.
In our region there are so many opportunities to enjoy the sport, and at a junior level we are seeing growth in the numbers of students participating.

The Bay of Plenty Youth Squad secured Under 15 singles titles at the recent Auckland and Waitemata Opens, with Max Henderson of Table Tennis Tauranga leading the way. Sixteen junior players, a record number from BOP, attended the Northern Region Teams Event in Hamilton over Queen's Birthday weekend, with some good individual results achieved. 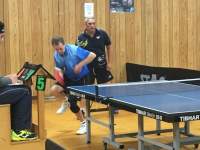 On 23 June, player of all ages will compete in both social and competitive grades at the Country Clubs Tournament at Taupo Events Centre, where the TTNZ National Veteran Championships were held over Easter.

Memorial Hall at QEYC, hosts Special Olympics Table Tennis sessions during June. In early September, AIMS Games offers a new event for players with a disability, promoting table tennis as an inclusive sport for all abilities and all ages.

Paul Henderson has been very effective in expanding table tennis activity in schools such as Katikati Primary, increasing overall numbers of students playing. The Bay of Plenty Intermediate and Secondary Schools Championships are now being split into three events from 31 July through 14 August, and will be a great lead-up for major events following, including NZ Secondary Schools Champs in Hamilton in early September.

AIMS Games table tennis, sponsored by Stag International, is primed to exceed previous entry numbers, with increased interest from other regions. The Bay of Plenty Open follows immediately, on 15 and 16 September. A fortnight later, the NZ Teachers Games includes table tennis for the first time, at Memorial Hall on 2 October.

Later that week the TTNZ National Championships commence at QEYC Memorial Hall, starting with Junior teams and individuals, followed by Seniors. TTNZ hopes to televise finals afternoon on 13 October with a 4-hour package comprising Open semi-finals and Under 21 and Open finals. Spectators are welcomed. We have fingers crossed that USA Table Tennis Media Manager, Matt Hetherington can bring a world-renowned player back to his hometown of Tauranga! The organisers seek more volunteers to improve the presentation of these important events, and for someone to manage in-house catering during Nationals. Any enquiries to jlea@xtra.co.nz