SportsTalk: Squash set to be prominent at Commonwealth Games 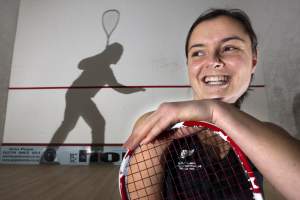 Come along and try it out… you will love it. That’s the message from squash as clubs around the country open their doors to promote the sport.

With New Zealand having its strongest squash team at the Commonwealth Games in recent memory, the sport is keen to capitalise on the profile it will gain from the Games on the Gold Coast.

The Bay of Plenty has a special reason to follow the games closely, with Rotorua’s Amanda Landers-Murphy an integral part of the team.

Amanda is the two-time and current World Doubles Champion, and Gold Coast 2018 will be her second Commonwealth where she will compete in the women’s singles, women’s doubles (with Joelle King) and mixed doubles (with Zac Millar).

Joelle and Amanda are the top seeds in the women’s doubles and are confident of a medal. While the competition is tough, the combination they have built up over the years certainly gives them an edge.

New Zealand is being led by top 10 ranked Joelle King and Paul Coll. Both players are seeded second in their singles draws, and together in the mixed doubles they are top seeds. New Zealand could walk away with as many as five squash medals, which is very exciting for the sport.

Until Olympic inclusion is granted, the Commonwealth Games is squash’s pinnacle event for New Zealand, so the National Open Day on Saturday, April 7 is well timed. On this day, people of all ages and abilities are welcome to come and see what the fuss is about.

Squash is a fun, fast and exciting sport that is easy to learn and can be played all year-round, no matter your age, skill level or gender.

Research shows that playing an equivalent of 30 minutes of squash can burn 517 calories. Playing squash has also been proven to help you live longer. This means squash is the perfect sport to provide lifelong total well-being – no matter if you are five, 35 or 65.

Unlike many other sports, squash is gender neutral and gives equal opportunities for males and females to participate, enjoy and achieve. Squash is also one of the most widely played sports in the world, with 20 million people in more than 185 countries on nearly 50,000 courts.

The National Squash Open Day is on Saturday April 7 (The first Saturday of the Commonwealth Games and quarter finals of squash) from 11am to 1pm.

In the Bay, there will be five clubs open: Geyser City (Rotorua), Marist (Whakatane), Mount Maunganui, Katikati and Te Puke.

For more information, contact one of the above clubs, visit our website www.squashbop.co.nz or call Squash Bay of Plenty today.