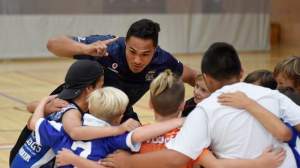 VODAFONE WARRIORS SKILLS AND DRILLS CLINIC:
Aspiring local rugby league players got the chance to throw a ball around and chat with some of their heroes at ASB Arena, Mount Maunganui.

A contingent from the Vodafone Warriors franchise, including players Gerard Beale, Junior Pauga and Johnny Tuivasa-Sheck, spent the afternoon in Tauranga ahead of the Warriors' NRL trial against the Melbourne Storm at Rotorua International Stadium.

About 115 young league players took part in a skills and drills clinic led by the players, with some kids travelling from as far as Kawerau to be there.

They came from all over the Upper Central Zone Rugby League catchment region for a chance to learn from two Brisbane Broncos.

The development hub attracted coaches and 130 budding Shaun Johnsons from under-13 to under-17 age divisions at ASB Arena.
Broncos elite player development manager Simon Scanlan and skills and recruitment coach Mick Kennedy came over from Australia to run the sessions.

The partnership between Upper Central Zone and the Broncos began in 2015 with the aim of growing the fundamental grassroots skill levels and structure of the game in the area that covers Bay of Plenty, Waikato, Coastline and Gisborne districts.

Scanlan says he loves coming over to facilitate courses and help grow an important part of rugby league's player base.
“What they are running here is a great example for probably a lot of the regions in New Zealand and a shining light of what a basic, skill-fundamental programme is all about,” Scanlan says.

“The improvement in this region since we come here four years ago is huge. The improvement in how the coaches deliver the programme, the skill development of the kids and how they train is a big step in the right direction.”

There are wider, holistic reasons why the Broncos are involved with helping rugby league in the Upper Central Zone region and not just trying to find the next big NRL star.

Bay of Plenty and Coastline Districts have their competitions well underway for all grades. These competitions are administered and facilitated by the Districts.

The Zone are pleased to announce the appointments of the following Representative Staff. The volunteer extraordinaire and very experienced Nickie Tane will be overseeing age group programme.

The Women’s team will be travelling to Nationals on Queens Birthday weekend. The team have been training in Hamilton for the past two weeks, and are proud to have KiwiFerns and double international Honey Hireme as the Team Captain. 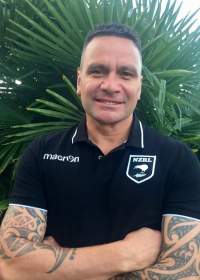 The remaining Wai-Coa-Bay Rep sides will be selected from the annual North Island Districts Tournament in July, which will be at Puketawhero Park in Rotorua.

We would like to announce our newly appointed Operations Manager Hamana Amoamo. Hamana, who is from Opotiki, comes to the zone with a wealth of experience and knowledge from Australian Rugby League system.