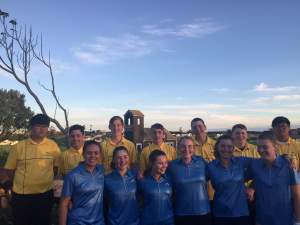 For years the association has heard that the time it takes to play 18 holes of golf is just too long.
And, to be fair, there are many occasions when clubs have a full field competing, at which point a game can stretch beyond 4½ hours.

Several of the proposed changes, which after consultation will come into effect in January 2019, are designed to speed up play. However, R&A have agreed not to wait until 2019 and introduced Ready Golf into their Amateur Championships this year.

Ready Golf simply means that each golfer within a group hits when ready. The largest club in the Bay of Plenty (Omanu) has already adopted the Ready Golf practice and this week the Bay of Plenty Golf Board will vote on making this policy for all Bay of Plenty strokeplay events – as well as recommending all 40 member clubs take up this initiative.

The term Ready Golf has been adopted as a catch-all phrase for a number of actions that separately and collectively can improve pace of play. There is no official definition of the term, but examples of Ready Golf in action are:

The proposed rule changes include reducing the time allowable in searching for a lost ball to three minutes, as well as other changes which should all make for a more enjoyable day out on the course for everyone!

Click here to read more from Bay of Plenty Golf.